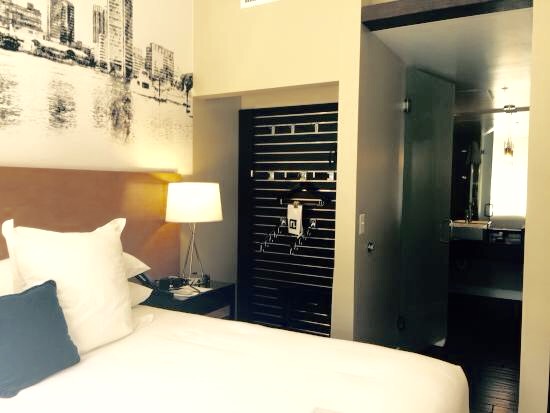 Our day started at 6 a.m. at a hotel in Baltimore. Our CRS organizer, Kim Lamberty, and her diligent assistant, Gladys Files, had found a more-than-comfortable hotel for our one night in the city before we – 11 professors from around the country – departed for Ghana to study water, sanitation, and hygiene.

My hotel room, although standard in accommodations, had a strikingly lavish bathroom. Twice the size of our bathrooms at home, with a marble floor and a six-foot-wide sink counter, it was incongruously luxurious.. The shower was especially notable, at least double the size of an average hotel shower with an extra thick and super-sized towel draped over the three-quarter-inch thick glass walls. I luxuriated, as much as one could at 6:30 a.m., in this shower, letting the water run over my body for at least 10 minutes. I even shaved under the shower. Afterwards, I brushed my teeth with running water for an extra-long time, realizing it may be 48 hours until I can brush again. I filled my water bottle from the tap and prepared to leave the room. I made sure I had flushed the toilet one final time.

As I prepared to leave, I looked around the room: at the bath mat I had stepped on just once, at the extra-long and thick bath towel, at the hand towel I thought was a bath towel because of its size, and at the wash cloth. I looked at the barely used sheets on the king-size bed, the four pillow cases, and the duvet. All these would also have to be washed. I had been in the room just 10 hours, but how much water had I used?

I tried to do a rough calculation of my water usage. Without data on the plumbing fixtures and the laundry process for linens it is impossible, but a guess would be perhaps three to four gallons for the toilet, eight or 10 for the shower. I have no idea how many gallons to wash the extravagant amount of linen. All this for a $99 hotel room. But what was the true cost of the water I used: the sourcing, the purification treatment, the delivery, the disposal?

But we will also be spending eight days when we will observe the complexities of a country making progress in its water, sanitation, and health.

For Ghana is a country where poor communities might not have safe drinking water or proper latrines, a country where children are subject to disease from fecal contamination. But it is also a country where progress is being made, not just in access to clean water, but progress in the interconnections in which water is a key element in the survival of children, the education of boys and girls, the creation of livelihoods for families, and the increased capacities of communities and government to help people thrive.

I look forward to being more conscious of water each day.