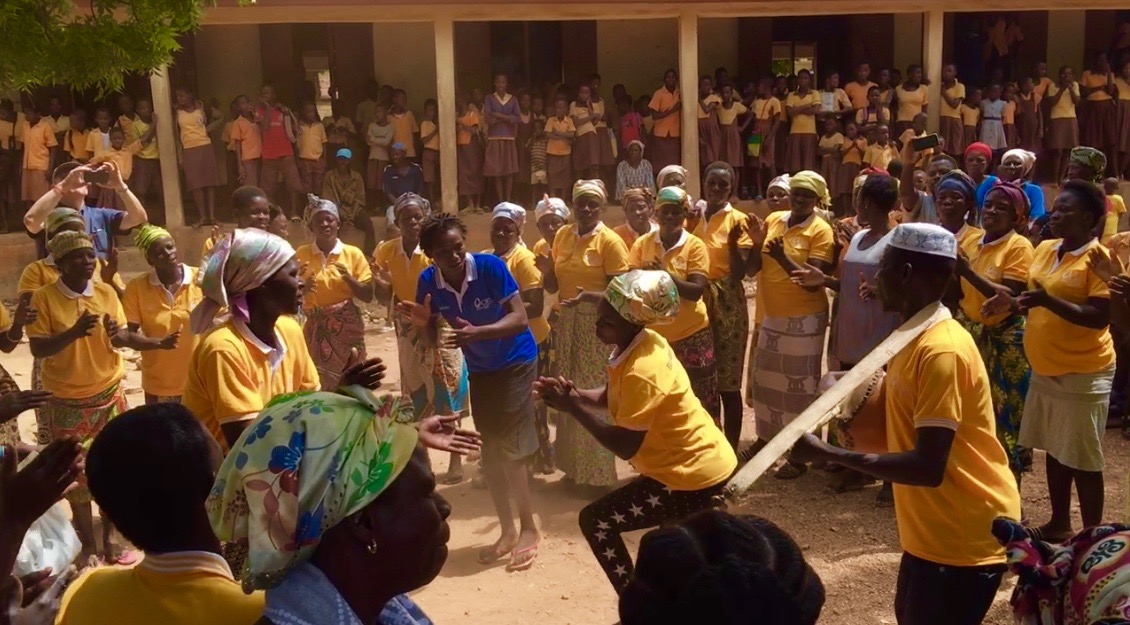 It was as if they were carrying something sacred. The first woman brought forward a blue metal box, the size of a toolbox, but with three brass padlocks on three of the sides. She placed the box on a plain wood table. She was followed by three women. The first woman, tall and striking in a lime-and-black striped dress, approached the table and unlocked and then removed one of the three locks. Then two more women with keys unlocked the next two. The safety of the contents was assured by the fact that it took four people to reveal the contents. One possessed the box. Three had keys to open three locks. The women then stood by as one woman opened the box and revealed the contents: two small cloth bags, three bowls, and a book. The resemblance to a religious ceremony was striking.

Each bag was opened and the women showed us the money they contained. This box was a bank for the poor. Two billion people in the world are “unbanked,” according to the World Bank. They do not have access to safe savings or loans. Why would banks bother with people like these Ghanaian women since many in these communities are among the most poor, some of whom earn just $1.25 a day?

Instead they might resort to predatory lending ads like the one here nailed to a tree when an emergency strikes. What we saw was a SILC group. SILC stands for Savings and Internal Lending Communities. SILC groups are the microfinance method CRS employs around the world with poor communities, but instead of infusing communities with outside money for loans, all the money here was the community’s own. Here, small groups, representing perhaps 15 to 25 families, form a SILC community, adopt their own rules for saving and lending and meet each week to collect savings, hear loan requests, lend money, and collect interest on the loans. Thus, over the course of a year, the group will amass a small amount each week from each person. It lends out money to members at an interest that was determined by the group, assign fines or penalties for infractions such as talking at a meeting. At the end of the year, the group will pay back the savings with interest and dissolve. It can then create a new SILC group with the same members or with different members.

The SILC savings can be used for many purposes. In the village in northern Ghana that 11 US faculty members visited with Catholic Relief Services, the community told us they used the money for their children’s education. We also spoke with a woman who had started a soap-making and selling business. Around the world, CRS reports that SILC savings are used to start and grow many businesses, even by Syrian refugees in Egypt. Account book shows steady savings by members of the equivalent of 50 cents a week.

The US faculty from Assumption College, Cabrini University, Manhattan College, John Carroll University, Xavier University of New Orleans, Marquette University, DePaul University, and Carroll College of Montana were impressed by the benefits of SILC communities beyond the financial.

One community even celebrated the benefits of SILC in song and dance in the video below.

A full explanation of SILC can be found in the CRS Field Agent Guide, developed by Guy Vanmeenen, formerly of CRS.