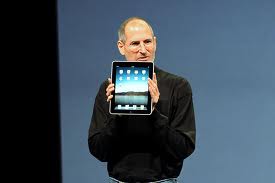 But if we step back, we see profound societal changes that resulted from the specific invention. There were automobiles before Henry Ford, but the mass production of the Model-T put the auto in the price range of workers. As the number of cars multiplied, the landscape of America changed as a result. Cars led to the need for highways and the interstate highway system. Highways led to the creation of suburbs and the attenuation of the extended family. Malls, the shipment of goods beyond the local town, and so on. So in a real sense, Henry Ford’s Model-T has resulted in much of what we consider modern America and the modern world.

Where Steve Jobs will ultimately be situated among the great disrupters, only time will tell. And which of his innovations will ultimately be the most significant is unclear. A case could be made for the Mac. At Cabrini, the Communication Department bought its first IBM PCs in 1982 to become one of the first college newspapers to use computers in the publishing process. But PCs were regarded as niche products for technical people. Steve Jobs’ vision for the Macintosh was as a home computer for the masses, something anyone could use. He wanted it to be popular and not require a bachelors degree in computer science to use. He has focused on that vision: ease of use, transparency of the device with the focus on what it would be used for.

His goals for the iPod, the iPhone, and the iPad were all the same: what would they be used for, not how do they work.

By stepping back, we can see how his products have changed the face of many industries. All the communication industries are radically altered because of him. He affected publishing first with the notion of “desktop publishing.” How quaint that sounds. But video, audio, advertising all are now in the hands of the masses and not the specialist. The iPod changed the music industry just as the iPhone changed personal communication. How much the iPad will affect printing, education, etc. remains to be seen. What the full impact his technology will ultimately have we won’t know for decades. But I think without a doubt the changes he initiated rival those of Edison, Bell, and Ford. It’s not a matter of whether you use an iPhone or an Android, a Mac or a PC, anymore that whether you drive a Ford or a Volkswagen. Jobs has been the one who has made us all digital creatures, from age 2 to 90.

So, yes, Henry Ford was not alone in the auto industry, but who thinks of Studebaker, Rudolf Diesel, or Ransom Olds? It was Ford that made America a nation on the move. It is Steve Jobs who made us digital citizens.