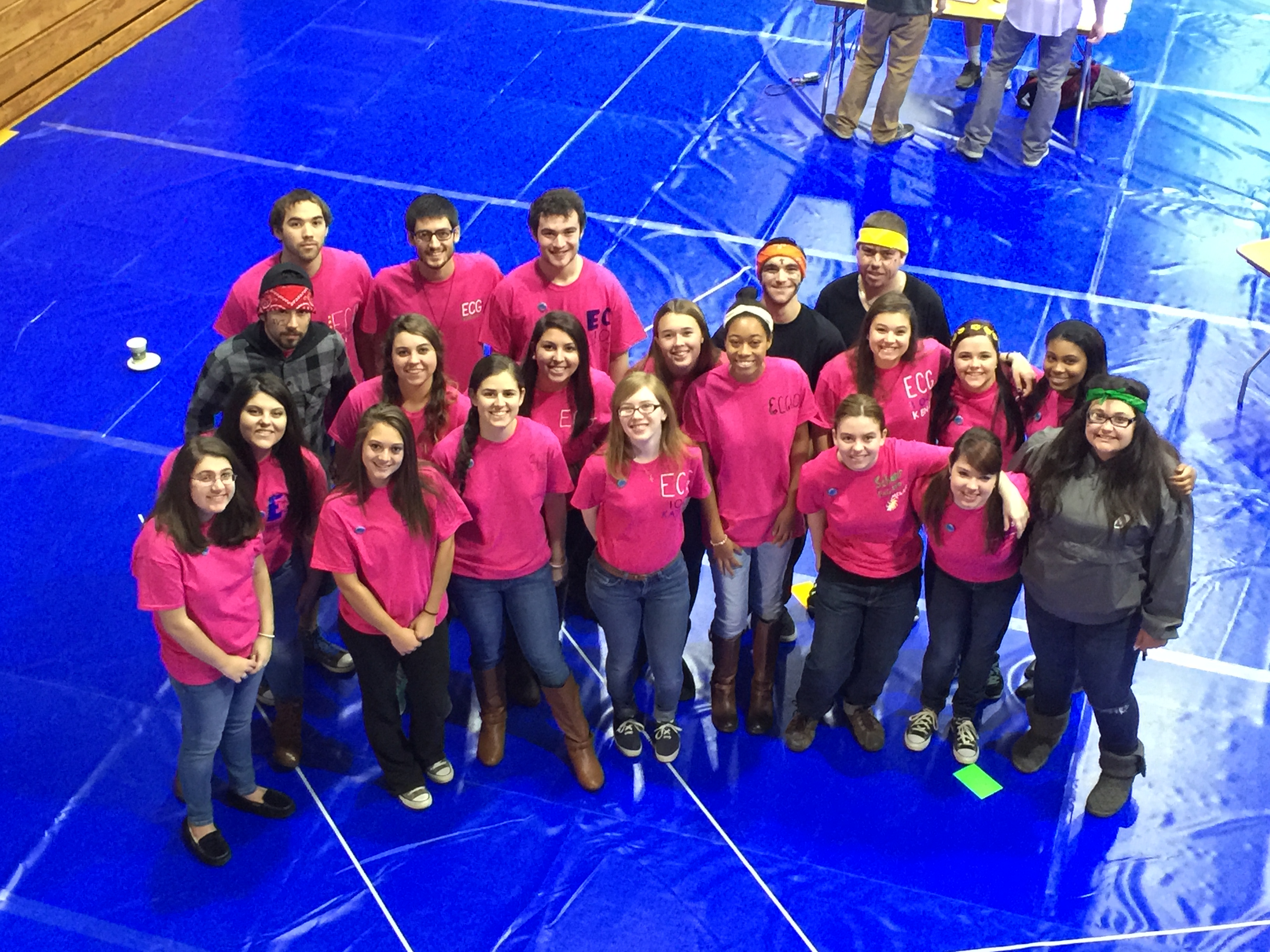 Refugees Seeking Safety simulation began as a topic of study within a course, grew into a Cabrini Day project, but then continued outside of class through the spring semester as new opportunities occurred. What engaged these students and how did their engagement grow?

1. Finding a topic. The topic itself, within the broader course theme, captured their imaginations. The ECG 100 course, Our Interdependent World, focused this semester on teens and young adults around the world who are living in harsh conditions. We narrowed our topics of study specifically to teens who are homeless in the United States, young Palestinian and Israeli adults, young Syrian refugees, and finally Unaccompanied Minors fleeing danger in Central America.

2. Settling on a mode of presenting their Cabrini Day Project. No doubt introducing the idea that they could think creatively and outside the box sparked their competitive juices. They really wanted to excel on Cabrini Day. They wanted to stand out. They wanted their message to be heard by the broader community. As Communication majors, the task given them was to communicate to other students and staff the insight they had attained. They knew the gym would be full with competing topics.

3. Finding a manner of presenting that would tap the skills of everyone in the class. A freshman class is a mixed bag of individuals. The Cabrini Day simulation offered roles for a wide variety of personalities. The chance to play a gang member appealed to some, researching advocacy appealed to others, while handling supplies and logistics fit others. One size does not fit all.

4. Developing a group identity. This was the first year of the new Digital Communication major. They knew that they were pioneers and this distinctive identity took hold. The cohesion was reinforced by several class trips. A collection of students formed into a more cohesive team.

But several other factors beyond these deepened their group identity and experience and contributed to the powerful effect the simulation had upon the students’ learning:

First, a supportive group or community. The classroom setting lent itself to group work, and the topic lent itself to division into three aspects. The 17-student class divided around three tables in the class, with each group taking on a focus and personality. The advocacy table of six students was the most studious. Their homeworks tended to be longer and more in depth. Their research into pending U.S. legislation was the most technical. The middle table consisted of several personalities who excelled in organization, process, management. These became the group organizers, exerted leadership, and had attention to detail. The back table were more marketing minded–how would the simulation play to the average student? This group came up with the insight that led to the title: that these are Refugees Seeking Safety and not people coming to steal our jobs. The class developed a group dynamic that consisted of 5 to 6 students making up the inner leadership core, and the remained of the students supporting the core.

The group dynamic was supported by the fact that the course was a Learning Community in which they took 2-3 courses together. A group identity that formed in the class clearly became a major factor in their success.  Although their was a variety of personalities in the class, they pulled together around common interests and goals. As one student put it: “I think having this group was everything.” Another said: “We push each other to keep going.” A third said that in addition to understanding that it was an important project to do, there was also a social aspect to it. They were doing the project with their friends.

Second, the classroom coach. The classroom coach was a key to success. A natural leader herself, the coach had asked for this role at the end of freshman year, so strong was her desire for the position. She had to wait a year to assume the role. The coach possesses intrinsic motivation to work for social justice. She has been a CRS ambassador and officer since freshman year. She is enthusiastic and passionate, with a desire to inspire these students. They felt her passion and a number were swayed by her. While most in the class were motivated to do well, she possessed a larger vision of what the project could be and what they could become, and so the force of her passion moved some from good to great. As one student said, “She was so passionate about social justice issues, it lit a fire in me because she lit up the room when she spoke about these issues.”

Cabrini Day brought the students together and concentrated their energy. It was a hard deadline. The morning of Nov. 11 was make or break. Each rose to the occasion, and their project was awarded first prize, which they donated to CRS in a ceremony at which a number spoke eloquently.

Following this performance of the simulation, further opportunities presented themselves. A grant proposal written by Tom Southard of the Wolfington Center resulted in a $2,500 grant by CRS and the Association of Catholic Colleges and Universities to make the simulation a replicable project for potential use by other college, high school, and parish groups. Founder’s Day and the 10th Anniversary of the Cabrini-CRS partnership were further opportunities to refine, expand, and present the improved versions of the simulation. A core team of five continued to work on the project as part of the grant and led the Founder’s Day and anniversary stagings of the simulation in the spring semester. These students engaged more deeply.

How did these half dozen students continue to grow?

They deepened their insight into human rights and commitment to action as they spent more time preparing for the second and third enactments of the simulation. The more they articulated their conclusions, the clearer the issues became.

Especially significant were discussions they had with their families. When asked about their family values and the role of religion in the way they responded to the issue, they spoke of how they were raised. As one said, “My family raised me to be a decent human being.” However, with a topic like immigration, several of the students said that they came to different conclusions than their family. The most religious person in the group said that she felt it was more her morals than specifically her religion that led her to her conclusions. Basic to her was “Ensuring that everyone is treated like a human being and everybody has the same rights and everybody has the same basic necessities that we do. Hearing that people don’t have that is why I want to change it, … Why I felt the obligation to start change, to raise awareness.” Another student, a quiet and reflective person, said she did get essential values from her family, but they had strong opinions that weren’t the conclusions she came to: “This whole class really opened my eyes to things that I wasn’t seeing before.” Another class member also experienced an expansion of her point of view: “My parents and people in my household don’t really expand their knowledge to things going outside of their world.” When she discussed the issue with relatives, their response was, “They’re not refugees, they’re just coming to get our jobs.” She disagreed but found it hard to carry on discussions with them.

Time and again the students made the issue personal. Several said that they compared the unaccompanied minors to their own younger brothers and sisters. “I know I would never be able to make that journey, and I definitely know my little sister wouldn’t be able to…. And I know I wouldn’t want to leave my home they way they were forced to leave their homes…. I put myself in their shoes.” Throughout the course, they were asked about their emotional reaction to what they were learning. The final paper question asked for their personal affective response in addition to the knowledge they acquired: “How has your heart been educated as a result of what you have learned this semester?” Their responses showed their openness to growth as well as a personal commitment to action.

The students repeatedly said how their eyes were opened in the course. More than that, however, the personalization of the issues affected them. One student powerfully expressed it this way: “Reading everything opened my mind and broke my heart.” The image of the broken heart signifies her openness to reality. This openness is then the prelude to action. The fact that they created a simulation gave them an engaged way to express their response as a group and in public.

So often, in classes, knowledge is acquired and opinion may be changed, but rarely can students find a way to express themselves in public and in action. Their openness and commitment gave them the desire to move to action: “I felt that we had–that I had–this obligation to then go in and help.”

The public nature of the simulation was important. The simulation required that they take on a public persona and convey conviction both to their peers and to college staff. In the second and third iterations of the simulation the stakes were even higher, with the audience consisting of people who have expertise in the subject of unaccompanied minors. As they conveyed what they learned, but in the character of a gang member or immigration judge, they had to make the knowledge their own and then externalize the knowledge for others. The repetition of their lines, the need to convey knowledge and conviction to others, allowed their knowledge to sink deeper within them. The feedback they received from participants and questions required them to learn more and become more expert.

The Learning Objectives of Engagements series of courses require an instructor to implement the Mission of the College: An Education of the Heart. The challenge of creating a course that attempts to address “academic excellence, leadership development, and a commitment to social justice” requires an instructor to develop strategies beyond those the transfer of knowledge and the acquisition of skills. If the goal is to prepare students to become “engaged citizens of the world,” the goal of the instructor must also include the formation of character. Each course, and each iteration of a course, must then become a unique experience, not just in the conception and planning, but in the execution. In this instance, a combination of factors came together in a moment of grace.