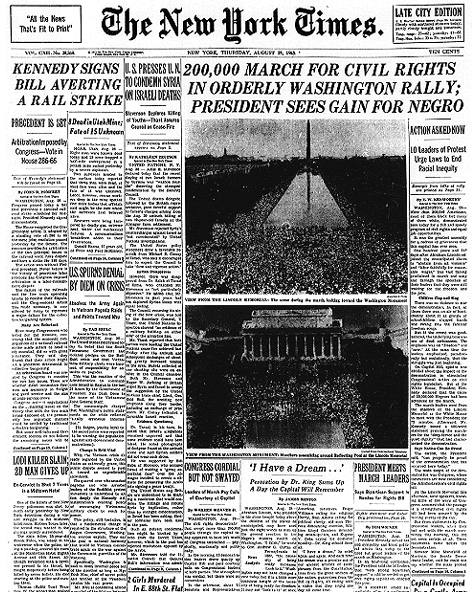 The Gallup Poll said that in 1957, just 4 percent of people thought that marriage between blacks and whites should be permitted, whereas now, 84 percent agree with interracial marriage. One didn’t need to do anything to be on the right side of history. One merely needed to live and times changed. We look back and think how benighted people must have been in 1957.

On the other hand, some moments seem to require courage and choice to be on the right side of history. I remember the days leading up to Aug. 28, 1963, when I felt I was on the wrong side of history.

It was the end of the summer before freshman year at Bellarmine College. School had not yet begun but we were all getting ready to start. A civil rights march was scheduled in Washington, DC, for August 28. The previous months had been some of the most intense, filled with news events of horrible racial conflict. Martin Luther King, Jr., had been arrested and held in Birmingham jail. The brutality of Bull Connor was shown vividly on our black and white television screens. Pictures of people being fire hosed and beaten were on the front pages. Medgar Evers was killed. These were the events in the news that year. For us young students just beginning our long course of studies to become Jesuits, all this was compelling but remote. Some of us were more attuned to civil rights whereas others of us were more focused on the academic and spiritual journey we were undergoing.

Luckily for the more sheltered among us, myself included, there were a number in our midst who had considerable experience, some having completed college or even graduate school. They were more knowledgeable and seemed to understand that although we were in a remote section of upstate New York, we were living in momentous times.

As I recall it, one of our group went to our college president and requested that we travel to Washington to participate in the March on Washington. Now looking back, we see the awe-inspiring photos of Martin Luther King standing on the steps of the Lincoln Memorial and delivering the “I have a dream” speech. But at the time, it was scary: violence seemed almost certain. The fight for civil rights, while morally clear as an issue, was controversial because of debates over conflicting tactics. Some among us were sure we should go while others felt the pull of other emotions, including the start of school, the remoteness of civil rights from our day-to-day lives, and even indifference. The college president solved our dilemma when he turned down our request. A scholar, he declared that in the long run it was more important for us to study for our courses than to participate in a demonstration. We felt he was foolish but we went along … and missed one of the defining moments of our nation.

So what does it mean to be on the wrong side of history? Should we have insisted on going? Should we have just taken a car and gone? Would our presence have made any difference? Would it have put our lives on a different course? More generally, are there defining moments and choices that set the direction of our life or is it really an amassing of many small choices that makes us who we are?